WT Ray appeared in the Indianapolis Recorder in January, 1944 after marrying Alice Brokenburr.

Many of Indianapolis’ African-American suburbs were created or managed by African-American realty professional W.T. Ray.  Born in New Haven, Connecticut, William Theodore Ray (1916-2010) made many stops on his path that prepared him for his storied career. A significant factor in Ray’s success was education. Following graduation from public schools in Caldwell, New Jersey, Ray studied business administration at Western Reserve University and Oberlin College. It was at Oberlin that Ray met his future wife, Alice Olga Brokenburr, daughter of Madame C.J. Walker attorney and Indiana’s first African-American State Senator Robert Lee Brokenburr, in 1936. From there, Ray attended Cleveland College part-time from 1938–1939.

Ray’s career as a young business professional was cut short when he entered the army in 1941. While in the military, Ray attended the Officers Candidate School at Edgewood Arsenal, then the Chemical Warfare School in 1942. Later that year, Ray was stationed in Tucson, Arizona at Ft. Huadhuca as the instructor in the general staff of the Chemical Warfare section while taking a staff officers’ course in order to get promoted to Major in the U. S. Chemical Warfare Service. Before being shipped out, Alice and her father traveled to Arizona where the couple was married. During World War II, Ray served in the Northern Solomons, New Guinea, Mortal, and the Philippines, after which he was honorably discharged in 1945 and awarded a bronze medal and three campaign stars. 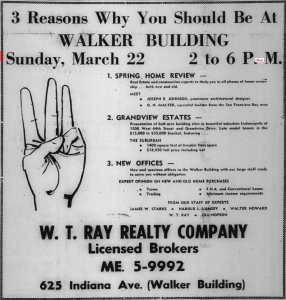 Upon returning to the States, Ray settled in Indianapolis, Indiana, Alice’s hometown, where they remained the rest of their lives. Soon after arriving, Ray again returned to school, attending Indiana University–Indianapolis from 1946 to 1947 to earn a degree in real estate. In the realty professional’s role, Ray had a front row seat to the suburbanization of Indianapolis’ African American residents through his real estate business. W.T. Ray Realty Company opened in early 1946 at 510 North West Street and operated for 35 years. In fact, he sold suburbanization: as the sales agent for Augusta Way, a 45-acre suburban addition west of Grandview Drive between 62nd and 64th Streets, Ray unveiled the neighborhood builder’s new 1,400 square feet, $17,800 floorplan actually called the “Suburban” in 1956. In 1959, as Ray’s business grew, W.T. Ray Realty opened new offices on the ground floor of the Walker Building. The agency’s former office now became the headquarters for a group Ray has begun to be involved with, the National Association for the Advancement of Colored People (NAACP). END_OF_DOCUMENT_TOKEN_TO_BE_REPLACED